Salesian spirituality is characterized by the gospel-based ”little virtues” of gentleness, patience, humility and liberty of spirit, to name a few. It is named “Salesian” in reference to St. Francis de Sales, who, along with St. Jane de Chantal, co-founded the Visitation order.

The Salesian Studies program exists to help nourish, deepen and extend the charism of St. Jane de Chantal and St. Francis de Sales within our school community and beyond. The program director achieves this mission by mentoring faculty and staff, co-coordinating masses and prayer services with the Campus Minister, introducing parents to the richness of Salesian spirituality, and partnering with teachers on ways to infuse their curricula with Salesian ideals and lessons.

Saint Jane Frances Fremyot was born on January 23, 1572 in Dijon, Burgundy. Jane grew up in a wealthy home and was educated through tutors that were brought to the home to educate her brother. At age 20, she married Baron Christophe de Chantal. They had a happy marriage and six children--four of whom survived. When Jane was 28, Christophe died in a tragic hunting accident. The following years marked a time of great interior turmoil and suffering.

In 1604, she heard St. Francis de Sales preach lenten sermons and at their first meeting, they recognized each other as gifted by God. A great friendship ensued, centered completely on God. In their conversations, Francis guided Jane to trust her instincts, to place herself before God and to relate to God in her own way. This advice led Jane to educate her children, and later the Sisters of the Visitation, to see each person as an individual, to guide each to love God in the way that best fit the individual’s spiritual inspirations. In his turn, Francis received many gifts from Jane. Soon they began to talk of a common dream that unfolded for each of them, a religious community that would accept widows, older women, and those not able to join the more physically difficult reformed orders. In 1610, after her children were settled, Jane and two companions founded the Visitation Order on June 6. She died on December 3, 1641. She was canonized in 1767.

Francis de Sales was born in 1567 in Annecy, France. He was well educated as a young nobleman, yet always strived toward the priesthood. When Francis was 19, he had an intense spiritual crisis and found himself in prayer in front of a statue of Mary. Francis prayed that if he was not destined to love God in eternity, he prayed to loved God as completely as possible each day he was alive. The peace he experienced after that prayer came from a loving God who became the major focus of his life from that point on. Francis was ordained a priest in 1593.

Francis spent the the initial years of his priesthood in the Chablais region near Lake Geneva as a missionary to the mostly protestant region. In 1602, Francis became Bishop of Geneva. His style was pastoral and he became a prolific speaker. In 1608, he compiled letters of spiritual direction into a book titled An Introduction to the Devout Life. His message in this work was clear--the laity are called to a life of commitment and a relationship with God in all the moments of daily life. After Jane and Francis established the Visitation Order, they remained in close contact through many letters of spiritual direction and friendship. Francis died in 1622. He was canonized a saint in 1665 and proclaimed a Doctor of the Church in 1877.

God, I give you infinite thanks. 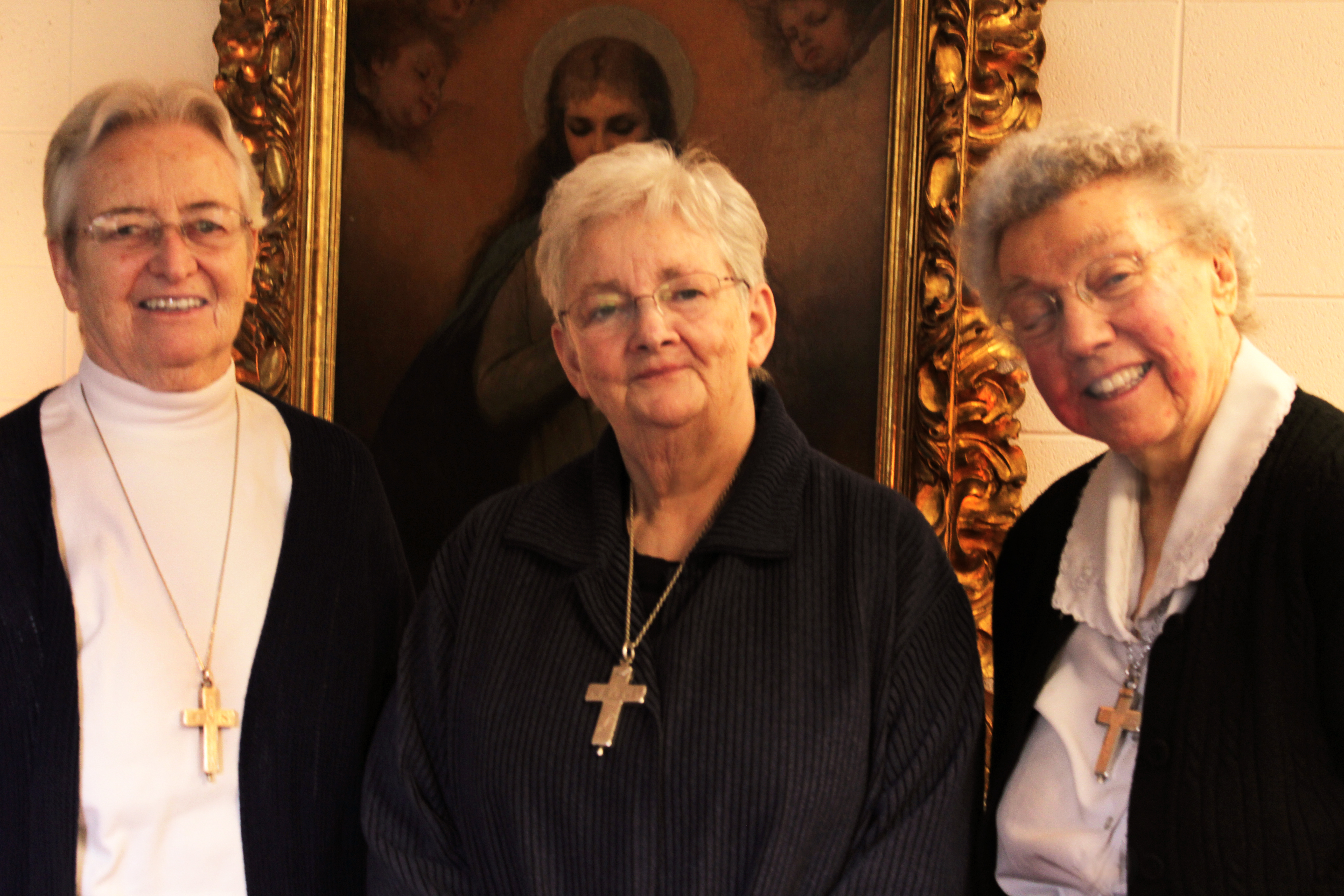 In 1873, six Visitation Sisters took a steamboat up the Mississippi River from Saint Louis settling in St. Paul and opening a school that September. In 1966, the Sisters moved from the Fairmount Avenue location to the current school location in Mendota Heights. Their special charism and their focus on the little virtues in life - kindness, patience, joyful optimism, humility, gentleness and strength - characterize their legacy, continue to guide all of us at Vis in our interactions and relationships each day and define the educational experience at Visitation School.

Be who you are and be that perfectly well.
Saint Francis de Sales

If you hold the goods of this world in one hand, hold fast the hand of God with the other.
Saint Francis de Sales

Our possessions are not our own, God has given them to cultivate and wishes that we render them fruitful and profitable.

Everything out of love, nothing by force.
Saint Francis de Sales

Let your heart be full of courage, and your courage full of confidence in God.
Saint Francis de Sales

Have patience to walk with short steps until you have wings to fly.
Saint Francis de Sales

Do not look at the faults of others but at their virtues and what is good in them.
Saint Jane de Chantal

Invite Christ into your heart and He will show in all your actions.
Saint Francis de Sales 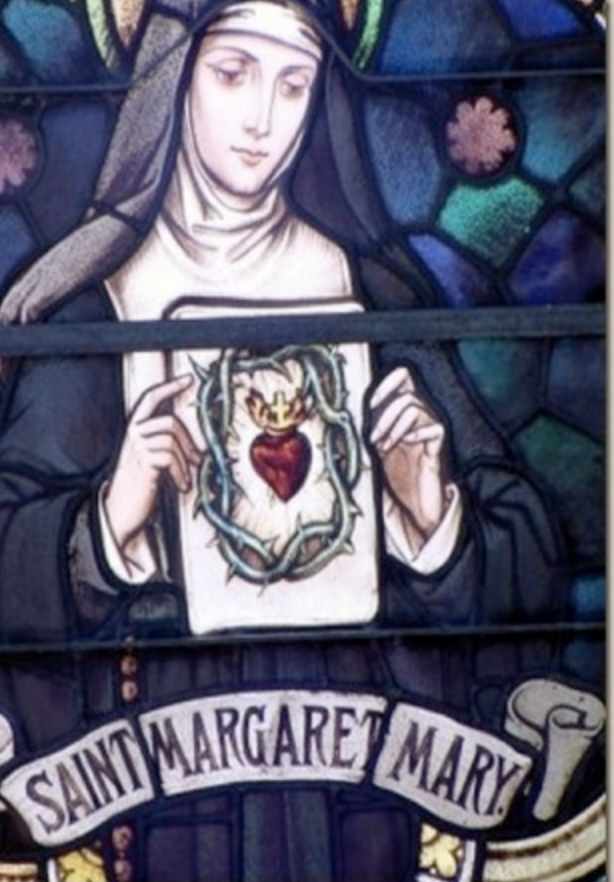 St. Margaret Mary Alacoque, VHM was a Visitation Sister who lived in France during the 17th century. She received visions of the Sacred Heart of Jesus who said, “Behold this Heart which has so loved men that it has spared nothing, even to exhausting and consuming itself, in order to testify its love.” We celebrate St. Margaret Mary’s feast day on October 17 with M&Ms and prayer and devotion to the Sacred Heart every first Friday of the month with Adoration and Mass.

Prayer to the Sacred Heart

Sacred Heart of Jesus. I adore you. I praise you. I bless you. I love you with all the strength and all the love in my heart. Make my heart bigger and increase my love so that I may love you more. This is the grace I ask of you, O Sacred Heart, for all the hearts that can love you. Amen. 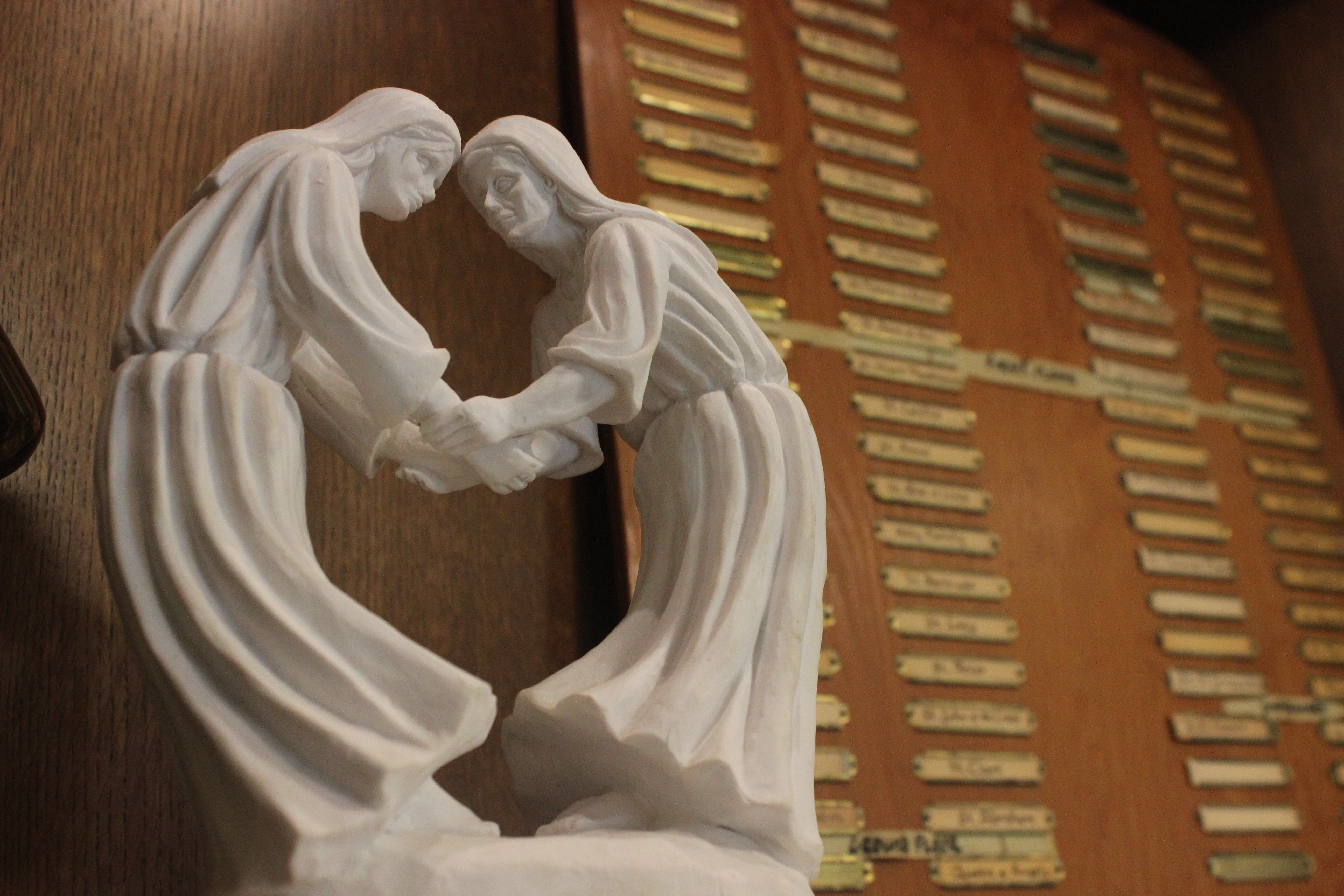 During the construction of Visitation’s Heart and Mind area, the Sisters’ Legacy Corner was established to honor our heritage. This contains an interactive monitor that shares stories of the Sisters, significant dates and photos. Also in the legacy corner are artifacts of the Sisters’ lives from the four Minnesota Monasteries.

Every day, our chaplain, Fr. Stefano Colombo, celebrates mass at 11:40 a.m.  We invite you to join us in the Sisters’ Chapel.  On Holy Days of Obligation and Feast Days of particular importance to our school, all school Masses are held.

Adoration
In keeping with the Visitatandine tradition to honor the Sacred Heart of Jesus as witnessed by Saint Margaret Mary Alacoque, we invite you to join us for Eucharistic Adoration in the Sisters' Chapel from 8 a.m. - 3 p.m.  Spend time in quiet prayer before the Blessed Sacrament or consider being a regular adorer. Contact Anne Williams via email or at 615-683-1734 for more information or to sign up for a regular prayer time.

Rosary
Every Wednesday, Visitation students pray a decade of the Rosary in the Sisters' Chapel at 7:50 a.m.  This is led by the Middle School students.

Friday Morning Prayer and Worship
Every Friday, students gather to sing worship music and lift their intentions to the Lord at 7:45 am in the Sisters’ Chapel.  This is led by DeChantal Music Ministry. 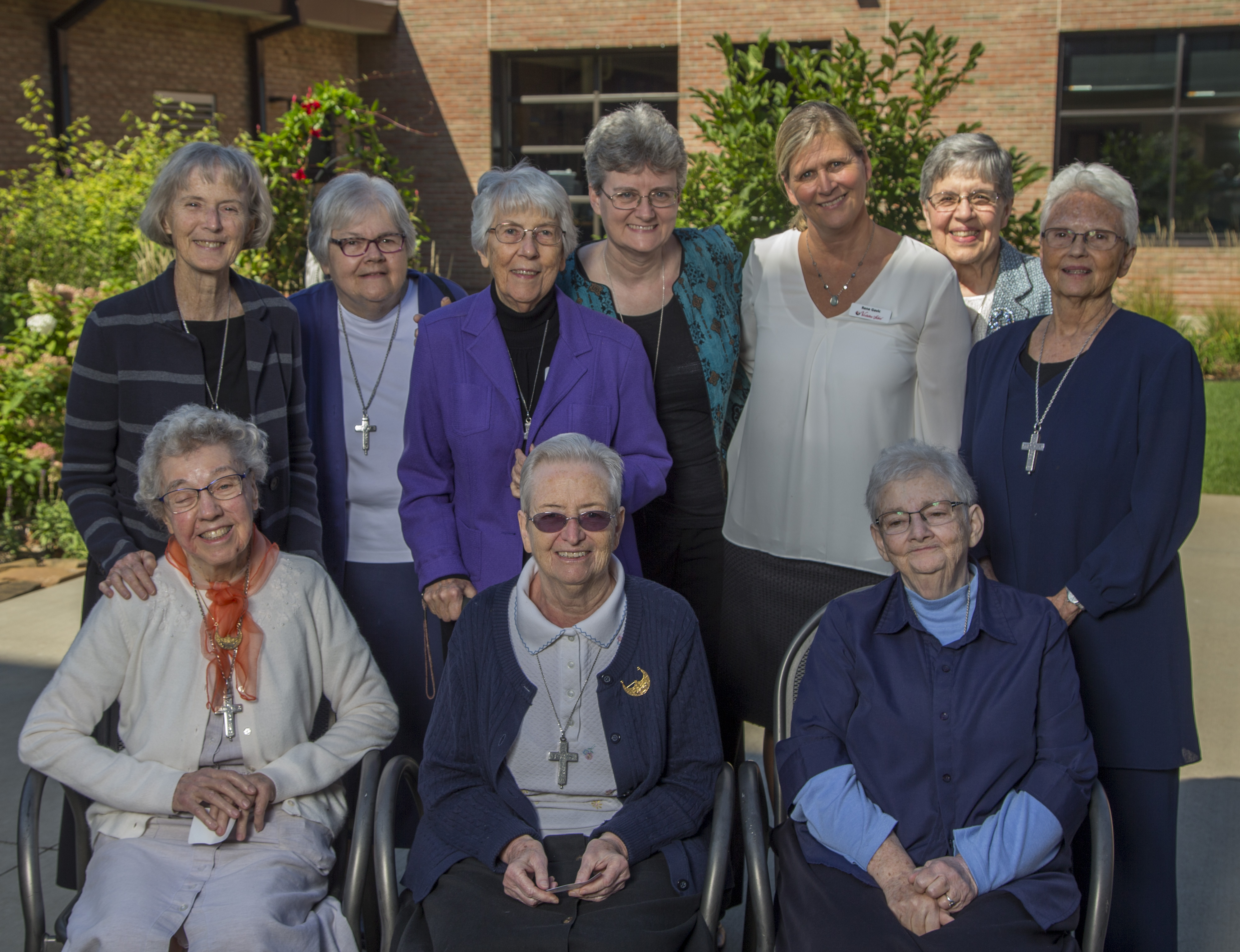 In 1988, after ten years of prayerful discernment, the Leadership of the Second Federation of the Visitation Order in the United States of America voted to found an urban monastic community in Minneapolis, Minnesota. On October 2, 1989, four Sisters were commissioned by Archbishop John R. Roach to be founding members of the new monastery for the purpose of expressing the Mystery of the Visitation in a new way—a commitment to be one with economically challenged and marginalized persons. This was the very first initiative of its kind in the United States.

Minneapolis Monastery’s mission has remained constant, while the focus has shifted with varying neighborhood needs, demographic changes and emerging gifts and talents of the individual sisters. When they first came to Minneapolis’ North Side, their initial outreach was toward neighborhood children. They used to hang a colorful windsock on our porch six days a week to signal to the children that they were welcome to come and visit, play and pray with the Sisters and one another. Over time, they expanded their ministry to families. They presently offer education sessions, such as cooking and nutrition, finance and budgeting, college preparation, etc. for neighborhood teens and families. They are also closely connected to supporting neighborhood groups engaged in advocacy and nonviolence. 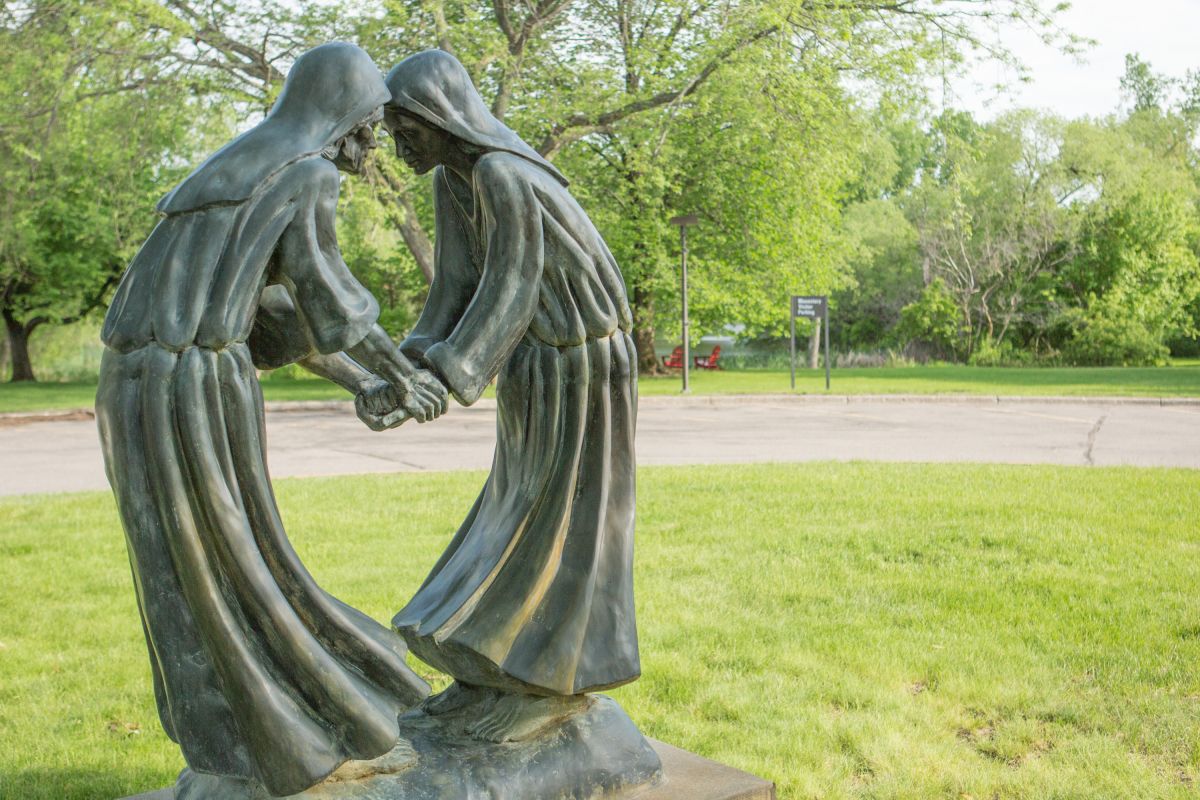